December 1. and one week until we in Europe get Nintendo Wii. I’m looking forward to that. Almost all my extra controller are on its way to me. Play-Asia confirmed today that all accessories will work fine on all Wii. You can can buy Japanese version of the controllers and use them on US and European Wii’s and the other way around. But games are region locked, and so are the Wii point. 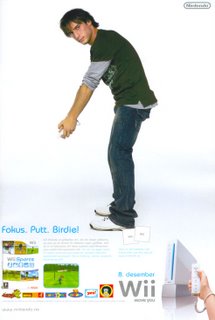