You can now buy Xbox Live Arcade titles from Amazon.com. When you purchase an Arcade game, you get a code which you then have to type into your Xbox 360 console or you can go to Xbox.com an redeem your code.

As often is with this great features, this is US only. (Source: MajorNelson.com) 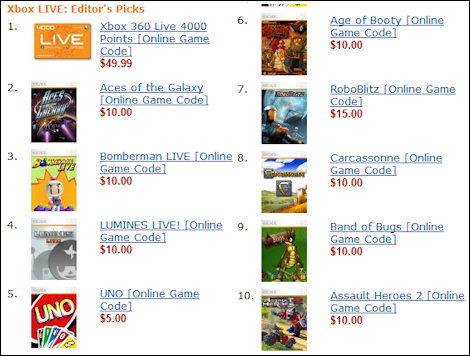 [UPDATE] I found this pressrelease on MaxConsole.net:

“PC gamers have enjoyed the convenience of digital downloads on Amazon.com for some time. Now Amazon.com and Microsoft are bringing that same level of convenience to platform gamers by expanding the reach of the Xbox LIVE digital platform to millions of Amazon customers,” said Greg Hart, vice president of Video Games and Software for Amazon.com. “This is an exciting day for Amazon.com customers, and we will continue to drive innovation that will provide our customers with the widest selection of video game platform downloads.”

“This partnership brings together two leading online brands – Xbox LIVE as the entertainment center of the living room and Amazon.com, a retailer that consumers rely on for great deals and wide selection,” said Christina DeRosa, general manager, Xbox LIVE Business. “With the overwhelming success of our existing Xbox LIVE Marketplace, it is clear that the 17 million active and engaged members of the Xbox LIVE community enjoy digital access to entertainment content. Now we’re happy to be extending our storefront to Amazon.com, a cutting-edge online retailer who is helping make digital distribution more mainstream.”

Through the Xbox LIVE Store, Amazon.com customers can easily buy Xbox LIVE Arcade games, subscriptions and Microsoft Points cards for themselves or friends and family. Points can be used to buy games in the Xbox 360 online Marketplace. The Amazon.com Xbox LIVE Store works on a code-redemption system where customers who purchase an Xbox LIVE product will immediately be able to view their Xbox LIVE code after purchase as well as e-mail that code to themselves or the recipient of the gift. Additionally, this code will reside in the customer’s Your Games & Software Library so they can retrieve it at any time. This digital delivery mechanism eliminates both the waiting time for the customer as well as reduces the waste associated with shipping packaged games and points cards. Customers can leverage Amazon’s recommendation and personalization engine to learn about new games that they also may be interested in based on similar purchase histories of like-customers.