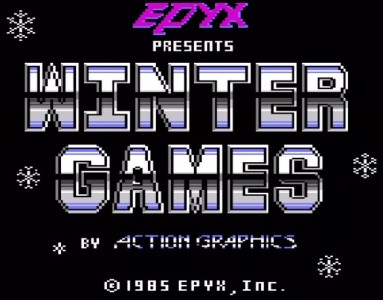 There is one gaming company that I do remember from the 80’ies, Epyx. They made a lot of good games. One, which I’m very fond of, is Winter Games on Commodore 64. The games was released on ‘all’ formats under the sun. And since it’s time for the Winter Olympics in Vancouver, Canada, I thought it was time to digg the game up and make a small review of it.

This is the emulated Commodore 64 version on Nintendo Wii’s Virtual Console (only available in Europe I think).

Winter Games have 7 eventens, detailed bellow. The games was released in 1985 and is 25 years old this year. Is the game still good? Yes, I think so. The graphics is quite blocky by todays standards. But all those 8-bit games have some sort of soul that many new games don’t have. Remember that these games ran on a 64 Kb computer. It’s amazing what they achieved with so little memory.

The characteristic C64 sound brings back good memories. The game emulates very well, it only lack a Tac 2 joystiq.

Under my YouTube-video, you will see a small description of each event. 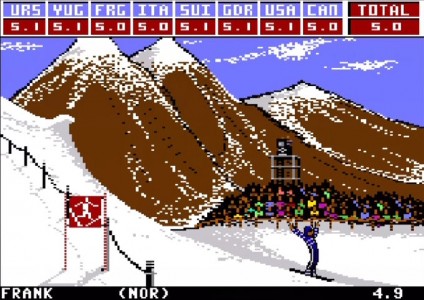 This is a freestyle event. Make your twist and turns and try to land stright. 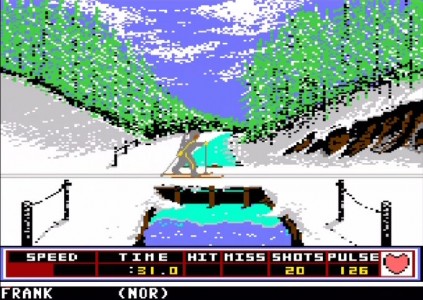 Find a nice pace with the left button to get a good rythm of your skier. Watch your heart rythm since you will get tired and slow down uphills. It will also be harder to hit your target while shooting. This is one of my favourite events. 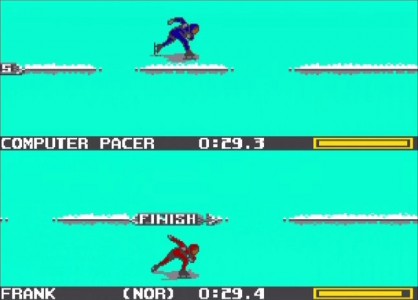 This event is pretty easy. Find a good rythm with the left and right buttons, and you will win easy. 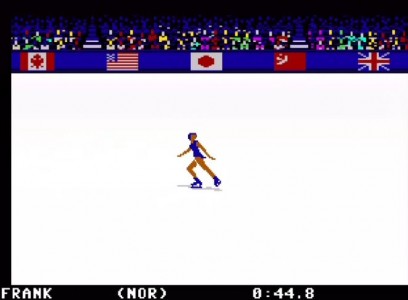 You have 1 minute to do your jump and spins. Sounds easy, but you have to land stright to get good score from the judges. 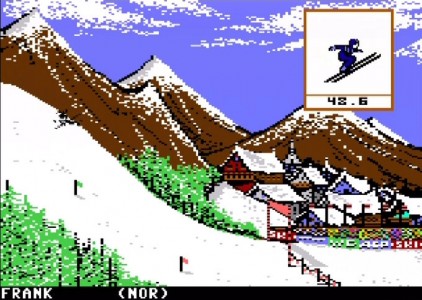 The key in Ski Jump is to time your jump right, have a nice flight down the hill and try to land standing. As you see in my video, this is something I’m not good at. 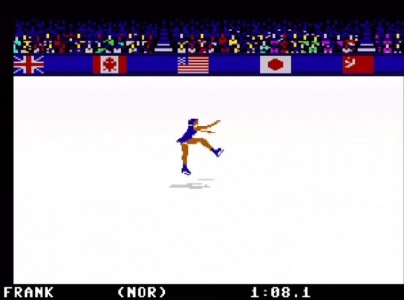 My only criticism to this game is that this event is the same as Figure Skating, except that you now have 2 minutes to do your athletic movements. 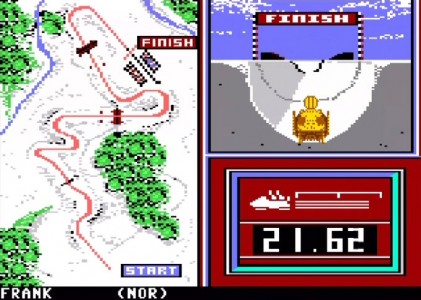 This is my other favourite event. Learn the curves and when to press the button, and you will do great.

In other words: Play some Winter Games. It’s still a great game after 25 years.

Do you have an old Commodore 64 laying around? Dust it of, buy a MMC Replay and download BREADBOX64. And you should probably take a look at Johan Van den Brande homepage. All this will make you Twitter on the good old C64.

Johan Van den Brande is the man behind BREADBOX64. He says that the software will work on both emulators and the real thing. Why you should use the C64 for twittering is up to you. But it’s cool, and from the YouTube-video he uploadet, it looks like it works to.

Following increased outbreaks in terrorism an insurgency using guerrilla warfare, the US Goverment has decided to hire a group of highly trained mercenaries. Their job: to carry out secret missions behind enemy lines. To go where no ordinary soldier would dare to go.

Based on the popular arcade game, MERCS for the Sega Mega Drive lets you play as a MERC on these dangerous missions, and also adds an Original Mode, allowing players to choose from 5 different MERCS. Take no prisoners as you shoot your way thorugh enemy forces, drive jeeps and tanks, and battle against huge bosses to accomplish you mission.

Picture this: You’re an athlete at the 1988 Winter Games in Calgary, Canada. And you’re about to move across snow and ice with as much speed, strength, endurance and grace as you can muster in the blustery cold.

Listen up, team. You’re here, at the winter portion of the world’s foremost amateur sports competition. You’ll match your skills against the top athletes from around the world. Be proud. Today you stand among the elite few whose courage and stamina will be tested by these Winter games.

Can you hear that? A fanfare of trumpets sounds as the Winter Games flag is slowly raised. Thousands of white doves are symbolically released, to fly to the countries of the world with the message of peace – and the news that the Winter games have begun. This is it, team – your chance to go for the Gold!

This week, Friday December 12, there was three new Virtual Console games to download for us in Europe.

In this top pick from the Sega Mega Drive collection, you play as Boogerman, the heroic alter ego of Snotty Ragsdale! While investigating Professpr Stinkbaum’s lab, Boogerman stumbles upon a strange machine that opens a portal to Dimension X Crement. Boggerman has a nose for adventure, but has he met his match this sticky situation?

Journey through dangerous worlds such as the Flatulent Swamps and the Mucous Mountains, while battling wicked enemies like Fly Boy and deoder Ant. Deal them a blow with Boogerman’s super abilities: pick and flick boogers with deadly precision, blech and pass gas with panache, and deal a deadly blow with his signature butt stump!

Operation Cobra Blue: a top secret surveillance and counterterrorist operation directed against Professor Elvin Atombender by Field Operations agent “Bravo 29”. Elvin, a known psychotic genius, is one of the world’s leading experts on robotics, compters and codes. He lives at the top of an immense eight-tower complex. So far, his complex has proven to be nearly impossible to enter by agents of any police or intelligence agency.

Intelligence reports inidicate that Elvin has spent the past four years trying to electronically break into military computer installations around the owrld, and he may be close to succeeding. In addaition, it is believed thatElvin is becoming increasingly mentally unstable. He has been monitored muttering threats about destroying himself and the world.

Your task: stop Elvin and to prevent him from destroying the world. You have 8 hours to complete your mission. Good luck, Agent.

In the previous instalment, the Last Ninja Armakuni was dragged across time and space to modern day New York to fight the Evil Shogun Kunitoki, the man who whiped out his clan. This was supposed to be their last battl… but yet again, the Shogun slipped away.

Armakuni began to build a new Ninja brotherhood. But once again the spiritual Ninjitsu masters are calling on Armakuni for another dangerous mission. This time they take him back in time to Tibet, whose temples contain the spiritual guidance and strenght that provide the foundation for all of the learning of the ninja brotherhood. Without these spiritual guides, they would be no more. Kunitoki has seized upon this opportunity to go back and destroy theknowledge he could never have, and bring an early end to the enemy he could never defeat.

Never has Armakuni’s task been more important… Never would the unacceptable result of failure be more damaging… And so, as you stand in Tibet as Armakuni, the Last Ninja, remember: the entire fate of the Ninja, past and present, is in your hands!

Originaly released in 1984, Boulder dash is well-known as one of the greats of the classic era of compuer games. It is one of the very few computer games ever to be prted from home computer to arcades, rather the other way around.

The hero of the game is the brave prospector Rockford. His mission: to dig through caves collecting diamonds. But it’s not as easy as it might seem! Rockford must stay constantly on the lookout for various types of dagnerous creatures and obstacles, like falling roks, which threaten his underground mission. He is in constant danger of being crushed or trapped by an avalance, or being killed by and underground explosion.

Strategy and planning are the key to master the “physics” of Boulder Dash. Once the indicated amount of Jewels have been collected, the door to the mysterious escape tunnel is revealed, and Rockford can pass through into another cave, filled with precious stones and dangerous traps! So what ate you waiting for? The diamond rush is upon us!

The enemy has infiltrated Jupiter Headquarters! Alienators have planted bombs throughout its thrirty levels and are ready to ashes at any moment. Can they be stopped?

Already, Jupiter #1 is starting to crumble. Can it be saved? And can the other two command centres be secured before the Alienators overrun their defences? It’s up to you!

You, trained as the goverment’s top secret weapon, are the only one able to defuse the boms and restore the communication systems. You are Jupiter Jumpman! You have the speed, skill and seven lives necessary to outwit the Alienators. You have the ability to scale ladders, girders and ropes, and traverse mysterious maxes to quickly find the bombs. Only you know how to defuse them.

Got ready for a second helping of the original Sonc the Hedgehog with the Sega MAster System remake of Sonic’s debut adventure! This version of the classic platformer game sports new stages, mew bosses and a level map.

With a host of new Zones exclusive to this version and a showdown with the evil Dr Eggman (aka Dr. Robotnic) at the end of each Zone, what are you waiting for? Let’s get to it!