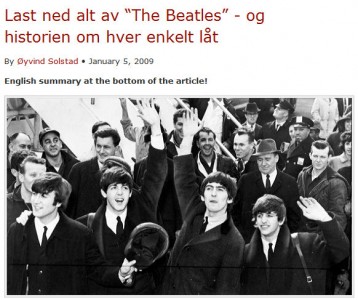 In November 2008 NRK – Norwegian Braodcasting – signed with TONO (the music rights holder organisation in Norway) what is probably the greatest deal in the world. They are now allowed to publish podcast which hold 70% music or less. This means that a lot of radio- and TV programs can be made available for a period of 4 week.

The great thing is that NRK had a radio series in 2007 called “Vår daglige Beatles” (“Our Daily Beatles”). They, Finn Tokvam and Bård Ose, start each episode with 3 minute history of a Beatles song and then play that tune. The presentation of the song is in Norwegian, but at least you get a Beatles song.

What does that mean to you? You can now download, for first time in music history, all 212 Beatles tunes in chronologically order, for FREE and LEGAL. You can’t even buy them at Amazon or iTunes.

The first podcasts are already available and the rest will come in January. They will be available for 4 weeks from publishing date of the podcast.

[Update – January 6, 2009] NRK had to pull the podcast “Vår daglige Beatles” because of rights. As NRKbeta explain on it’s site:

Our new agreement with rights holder TONO gives us rights to publish radio and TV shows we aired a long time ago. But the agreemnt NRK has with rights holders IFPI and FONO only allows us to publish shows that has been aired the last four weeks. And since “Our daily Beatles” was aired in 2007, we have to pull it from the podcast (see below for details about the agreements).

That is to bad. So to publish this series as a podcast, they have to re-run the show on radio first.