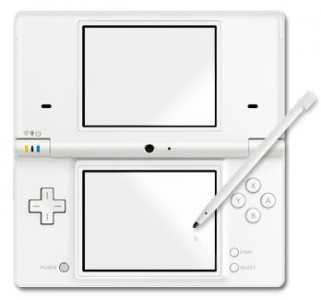 Here is the full press release from Nintendo.co.uk (via GoNintendo.com):

19 February 2009 – Nintendo will launch its new handheld console, the Nintendo DSi, in Europe on 3 April 2009.  The Nintendo DSi will be available in black or white and is the thinnest and lightest member of the Nintendo DS family.  The console is packed with new features that will excite fans of and newcomers to the Nintendo DS range.

There are many ways to have fun with the Nintendo DSi, from creating, customising and sharing photos with friends & family or listening to and experimenting with your favourite music, to playing more than 1000 Nintendo DS games and downloading new Nintendo DSiWare games directly onto your console. The Nintendo DSi also features built-in Internet browsing capabilities, meaning the fun begins the moment you switch it on!

Nintendo DSi brings motion-detecting cameras to handheld gaming
The Nintendo DSi incorporates two cameras, adding an entirely new dimension to gameplay. The cameras are able to accurately detect facial features and players’ movements. Moving the upper body, hands, arms and head in front of the camera now means play can be directed by movement alone, bringing a whole new way of interacting with the handheld.

Users can edit their images in real-time or after they’re taken. Choices include a distortion tool which allows users to use the Stylus to distort their image in a variety of quirky and fun ways. Turn any face into fans’ favourite Mario with his famous moustache and hat, or frame the image beautifully in a style of your choosing. Everything you create can be saved into a personal photo album which in turn allows you to use your Nintendo DSi as a personal digital photo frame! Users can share their snapshots with friends and family wirelessly. Or by saving the content onto an SD memory card, users can upload to their personal computer or their Wii and share with friends and family using WiiConnect24!

For example, users can slow down a phrase in a foreign language to get the pronunciation just right.  But they can equally have fun recording their own voices and manipulating the play-back – adding sound effects to create new fun with sound.  Players can also change the speed or add sound effects to songs, enabling them to create their own unique mixes, as well as learn words and instrumental solos more easily.

All of this and more can be downloaded directly from the Nintendo DSi Shop via the Internet, and thanks to the Nintendo DSi’s built-in flash memory these can be saved directly onto your console, meaning you can take all of your games and other applications with you wherever you go.

Packed with features, but thinner than ever
In addition to all of the new features, the Nintendo DSi comes in a matt finish and is a full 12% thinner than the Nintendo DS Lite, making it Nintendo’s most portable handheld ever.  However, it also packs a punch with bigger, brighter, 3.25” screens. As well as offering downloadable software via the Nintendo DSi shop, the new handheld is able to play games made specifically for the system and most Nintendo DS games – offering access to a library of hundreds of existing titles.

Nintendo DSi launches across Europe on 3 April in black and white.