Sometimes I wish I had a bucket loads of money so I could get all the super special editions that do exist on DVD and Blu-ray. The latest box I want is Lost: The Complete Fifth Season Dharma Initiation Kit on Blu-ray which is out on December 8, 2009 priced at $93.99 on Amazon.com and available for pre-order now.

According to HighDefDigest.com it will come on five BD-50 Blu-ray discs with DTS-HD Master Audio 5.1 soundtrack, 1080p video and a bunch of featurettes and deleted scenes. From the picture it looks like you get a VHS too, but no detailed infromation is available as of yet. 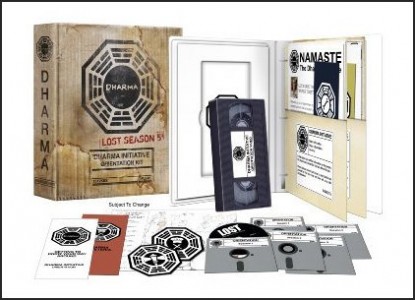