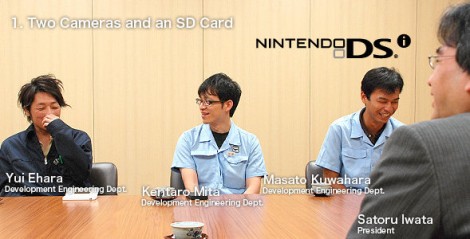 You can read the complete conversation at NintendoDSi.com, but here is the start of it:

Iwata
Let’s start with how development of the Nintendo DSi system began. It was you, Kuwahara-san, who started moving on this, right?

Kuwahara
Yes. I’m Masato Kuwahara from the Development Engineering Department. It all began when toward the end of 2006 my boss assigned me to work on a new DS and told me to put together a proposal for presentation at the end of December outlining what kind of system we wanted to make.

Kuwahara
I’ll say! And by February of the next year, we would had to hammer out most of the specifications for the internal chip. We had to move at an incredible pace. From planning to determining the specs, we moved from one thing to the next without pause. It was pretty intense.

Iwata
During that time, was there anything you worried about or focused on?

Kuwahara
One thing that was difficult was developing the project while keeping in mind how to sell it. What I mean is, it wasn’t a completely new piece of hardware, so we couldn’t plan on there being several big titles to be simultaneously released with it.

Iwata
Because it’s not an entirely new platform. It’s the third console in the Nintendo DS line.

Nintendo DSi is selling like hot cakes on Amzon.com. All the pre-orders have made Nintendo DSi onto the Top 10 Game list on Amazon.