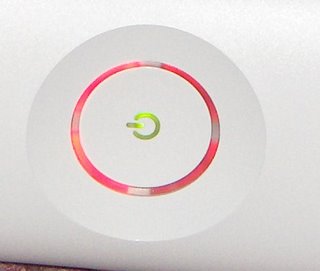 Well, it’s my time to get the “Red Ring of Death”. I have had some freeze ups on my Xbox 360, but it have only happened from time to time. Not like this weekend. I played Burnout as usual when the 360 froze. I was around the 800th place, and when I turned my Xbox on again, I had fallen to 46000-or-something place. Not Good. I played 5 minuttes and it froze again. It also happened a third time. So I took a break to the next day.

It started up but froze afer 5 minuttes. I removed everything and remounted the powersupply and videocable and the HD. Froze. It even froze in Dashboard without the harddrive. Later in the day I only got three red lights.