Skip to content
Uncategorized
September 14, 2006June 14, 2009 technofranki
The information in this post is based on what you find at Nintendo of Japan. Since that page is in Japanese, I used Altavistas Bable Fish to make an understandable translation. Some of the headlines is mine and not the official ones. Alot of the features use the WiiConnect24 function.

Virtual Console
You will be able to play a lot of Nintendos previously games here. You can buy the games with you credit card or pre-paid cards. The price list is as follow: NES 500 Yen, SNES 800 Yen and N64 1000 Yen. By the end of this year, 30 titles will be avaible and on avarage 10 new titles will be made downloadable each month.

Wii Channel
The Wii will offer different “channels”. Web surfing, weather info and Virtual Console games will each be a channel for you to select.

Photo Channel
Since the Wii have a SD port, you can put your memorycard from your camera and wivew the pictures on TV. You can even manupilate the pictures, take bit and pices from one picture and stamp it in another. The pictures can be sendt to your friends and I guess this feature will be used in some games too.

Weather Channel
With this channel you get the weather forecast not only for your area, but for the whole World.

News Channel
Here you will get the latest news.

Internet Channel
Opera can be downloaded. The price is not know at this point. The Wii-mote makes it easy to surf. 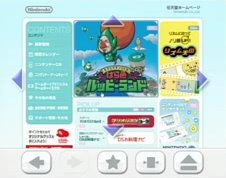 Wii Message Board
You can write messages and send it to other Wii users, including pictures. There’s also a calendar so you can write important memos you need to remember. On the bulletin board you will get news from Nintendo and other publishers.

Mii
This is your digital self (avatar). You make your own character and can tweak everything from haair colour, face and body shape to the colour of your dress. This, I guess, will be assosiated with your profile on the Wii. The character may be used in various games (Wii Sports as seen on E3). From the video, it looks like you can go around and meet other people.

More information and videos can be found at Wii.com.