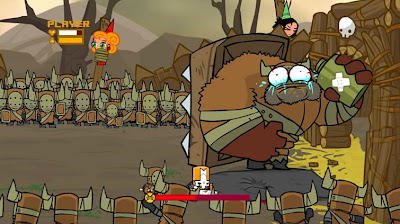 Hack, slash, and smash your way to victory in this red-hot arcade adventure from the award-winning development studio, The Behemoth! Featuring hand-drawn characters, Castle Crashers® delivers unique hi-res illustrated visuals like nothing you’ve ever seen before.

Play with up to three friends locally or over Xbox LIVE® and discover the mind-boggling magic and mystery in the amazing world we have created just for you. Save your princess, defend your kingdom, and crash some castles! Play with more than 20 unlockable characters, 40 weapons to customize your hero, and an arsenal of combos and magical attacks to choose from.