This week on Wednesday September 24, 2008 you can download Duke Nukem 3D from Xbox Live Arcade for 800 points. The game is not available in Germany and Korea. 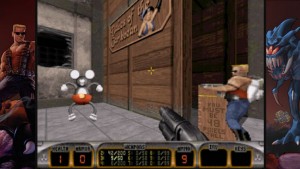 Duke Nukem, the politically incorrect action hero and ultimate alien ass kicker, defends Earth and its babes from alien invasion in Duke Nukem 3D. This is the award winning game that helped define the FPS genre, introducing unparalleled interactivity, and a main character that spoke. Take the fight to the aliens across 39 levels featuring Hollywood, Los Angeles, a moon base, and alien spacecraft. Innovative items like the Jetpack, HoloDuke, Shrink Ray, or Pipe Bombs allow you to fight the aliens in any style you want. Defeat the aliens, so Duke can get back to some R&R with a stogie, a warm belly, and a bottle of Jack.