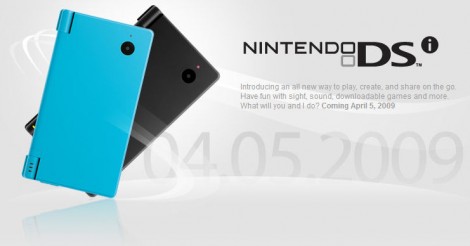 On April 5th, the Nintendo DSi will be released in North-America. It will be priced at US$169.99, and you can already pre-order it on Amazon.com. So I hope that we in Europe will get a release date soon too.

IGN.com have a hands-on the US DSi.

Here is the pressrelease taken from IGN.com:

February 18, 2009 – REDMOND, Wash.–(BUSINESS WIRE)– Nintendo pioneered hand-held entertainment in the ’80s and made it fully mobile with the Game Boy™ video game system. Now, Nintendo is transforming the way people access, experience, create and share content with the new Nintendo DSi™ system, the third iteration of the world’s best-selling portable video game system. Nintendo DSi launches in the United States on April 5, 2009, at an MSRP of $169.99. The colors available at launch will be Blue and Black.

“Ever since the arrival of the first Game Boy, consumers worldwide have turned to Nintendo for their portable gaming,” said Cammie Dunaway, Nintendo of America’s executive vice president of Sales & Marketing. “Nintendo DSi builds on Nintendo’s commitment to bringing fun and creative entertainment to everyone, and will allow consumers to personalize and share their very own experiences.”

Some features that will be built into the system and ready to enjoy upon purchase include the Nintendo DSi Camera, Nintendo DSi Sound and Nintendo DSi Shop. The most noticeable feature of the slim Nintendo DSi system is its two cameras – one camera is on the external body, and the second one points at the user when the device is flipped open. As the first truly interactive digital camera in a video game system with 10 different interactive “lenses” that can manipulate your photos, the Nintendo DSi Camera offers an easy way to take and share your photos with family and friends. The cameras also present people with unprecedented ways to interact with their games while giving developers a new tool to devise creative games and experiences. If the touch screen gave Nintendo DS a sense of feel and the microphone allowed it to hear, the two cameras give Nintendo DSi the sense of sight.

Another enhanced feature is the Nintendo DSi Sound application, which serves as both an interactive voice recorder and music player that allows users to play with their music while they listen to it. Users can access different audio filters or control the pitch and speed of recorded voice or music files to alter voices or change the tempo of a song. The mic is located between the two screens when the device is flipped open, and there is also a stereo headphone output that lets users listen to music saved on an SD card, even with the screen shut.

In addition to downloadable games, Nintendo DSi is able to play games made specifically for the system and sold at retail. The system can also play most Nintendo DS™ games, and will have access to a library of more than 850 titles originally made for that system.

Also on April 5, a new Nintendo DS game, Rhythm Heaven™, will join this roster of games available for both Nintendo DSi and Nintendo DS owners in the United States. Having sold more than 1.6 million copies since its July 2008 launch in Japan and still increasing sales today, this infectious game challenges players to tap and slide the stylus on the touch screen in time to original music created by legendary Japanese pop-star producer TSUNKU♂. Simple gestures with the stylus combined with fun music and quirky visuals make Rhythm Heaven a completely unique musical experience for players of all ages.

Additional features and news of Nintendo DSi will be revealed as April 5 approaches.

About Nintendo: The worldwide pioneer in the creation of interactive entertainment, Nintendo Co., Ltd., of Kyoto, Japan, manufactures and markets hardware and software for its Wii™ and Nintendo DS™ systems. Since 1983, when it launched the Nintendo Entertainment System™, Nintendo has sold more than 2.8 billion video games and more than 485 million hardware units globally, including the current-generation Wii and Nintendo DS, as well as the Game Boy™, Game Boy Advance, Super NES™, Nintendo 64™ and Nintendo GameCube™. It has also created industry icons that have become well-known, household names such as Mario™, Donkey Kong™, Metroid™, Zelda™ and Pokémon™. A wholly owned subsidiary, Nintendo of America Inc., based in Redmond, Wash., serves as headquarters for Nintendo’s operations in the Western Hemisphere. For more information about Nintendo, visit the company’s Web site at www.nintendo.com.