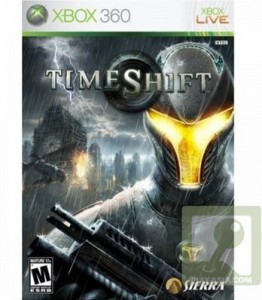 This Weekly Special at Play-Asia.com is Timeshift for Xbox 360. The game is region free (the Asian version with English text/speech) and cost only US$ 16.90.

In TimeShift, you assume the role of renowned test pilot Colonel Michael Swift who recently lost his only daughter in a bus accident. Depressed and desperate for an escape from his misery, Swift decides to accept a recent offer from the U.S. Government.

Armed with a time-control device called the “Quantum Suit” and a time machine called the “Chronomicon,” Swift sets out to test the most significant inventions of the century. He is briefly sent back in time to 1911 to plant an experimental probe. Upon his return to the present, a shift has occurred. The world he left has changed beyond all recognition. And his knowledge of this timeshift has made him an enemy of the state. Swift is now both on the run and on a mission to set time straight once again.