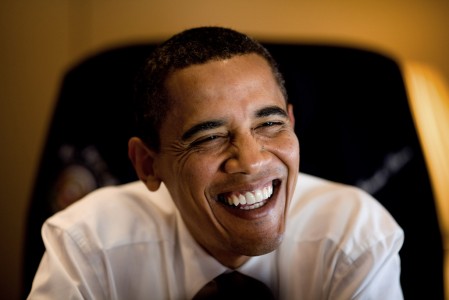 This years Nobel Peace Prize for 2009 goes to the president Barack Obama. It’s an interesting choice, since he haven’t been president for that long. But he do have visions, and that is probably the reason he got this years prize.

The Norwegian Nobel Committee has decided that the Nobel Peace Prize for 2009 is to be awarded to President Barack Obama for his extraordinary efforts to strengthen international diplomacy and cooperation between peoples. The Committee has attached special importance to Obama’s vision of and work for a world without nuclear weapons.

Obama has as President created a new climate in international politics. Multilateral diplomacy has regained a central position, with emphasis on the role that the United Nations and other international institutions can play. Dialogue and negotiations are preferred as instruments for resolving even the most difficult international conflicts. The vision of a world free from nuclear arms has powerfully stimulated disarmament and arms control negotiations. Thanks to Obama’s initiative, the USA is now playing a more constructive role in meeting the great climatic challenges the world is confronting. Democracy and human rights are to be strengthened.

Only very rarely has a person to the same extent as Obama captured the world’s attention and given its people hope for a better future. His diplomacy is founded in the concept that those who are to lead the world must do so on the basis of values and attitudes that are shared by the majority of the world’s population.

For 108 years, the Norwegian Nobel Committee has sought to stimulate precisely that international policy and those attitudes for which Obama is now the world’s leading spokesman. The Committee endorses Obama’s appeal that “Now is the time for all of us to take our share of responsibility for a global response to global challenges.”

I liked the Sonic games, when they was in 2D. I don’t think Sonic work that good a 3D enviroment. The game was meant for 2D. Lyckily, Sega is now working on a new Sonic game in 2D and for now, goes under the name Project Needlemouse. The game will be out in 2010.

Watch the teaser below.

Michael Jackson would have turnet 51 today if he still was alive. He would have been in London at the O2 stadium playing the This is it concerts. It was also known this week that Michael Jackson death was a homicide.

Dr. Sanjay Gupta reports on the results of the coroner’s report in Michael Jackson’s death and the drugs that killed him. 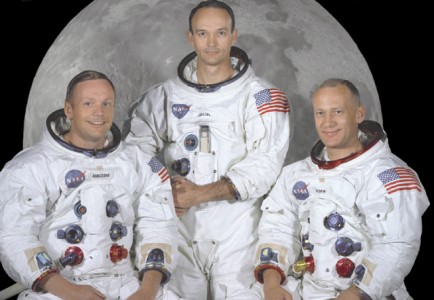 President John F. Kennedy had courageous when he in a speach (which you can read here) in May 1961 said the following:

“I believe that this nation should commit itself to achieving the goal, before this decade is out, of landing a man on the Moon and returning him safely to the Earth.”

And the Americans managed to fulfill the goal of Kennedy. On July 16, 1969, the three astronauts Neil Alden Armstrong, Michael Collins and Edwin Eugene ‘Buzz’ Aldrin, Jr. was onboard Apollo 11 on the way to the Moon. Four days later, July 20th, The Eagle landed on the Lunar surface, Sea of Tranquility.

Here you can hear the countdown to the launches of Apollo 11.

So today does marks the 40th years anniversary of Moon landing. There was great competition in the 50’s and 60’s  between the Soviet Union and the United States. The Russians where ahead in the space race after they were first to send an artificial satellite (Sputnik 1), a living being (Laika the dog) and the first man (Jurij Gagarin) into space. But the Americans were the first to land on another planet.

While Michael Collins was left in the main vessel Columbia, Neil Armstrong and Buzz Aldrin where in The Eagle on the way to the Moon’s surface. In addition to the moon landing whitch was a technical achievement for the Americans, it gave us perhaps two of the most famous quotes from the last century, namely “The Eagle has landed” and “That’s one small step for a man, one giant leap for mankind” as Armstrong said after he was the first to set foot on foreign soil.

Here you can hear the sound clip from the Eagle’s landing on the Moon.

And here is the sound clip from Armstrong’s “speach“.

Here is the remastered edition of the moon landing in connection with the 40 year anniversary.

If you need more information about moon landing, so check out NASA’s Apollo 40th Anniversary pages or Wikipedia.org (which is also my sources for this article).

Here are some images from the Apollo 11 expedition (taken from Great Images in NASA). 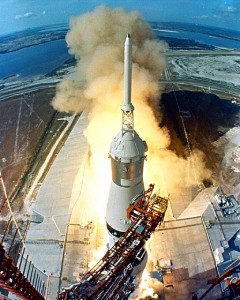 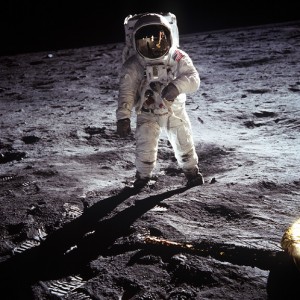 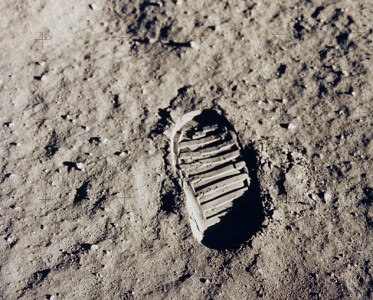 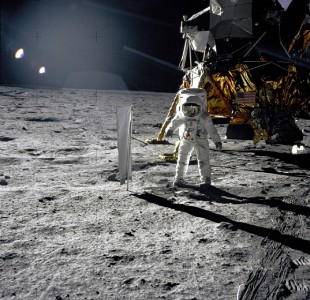 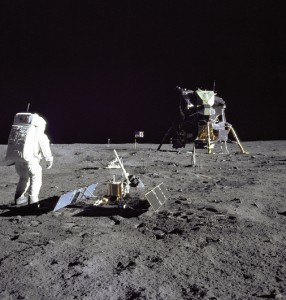 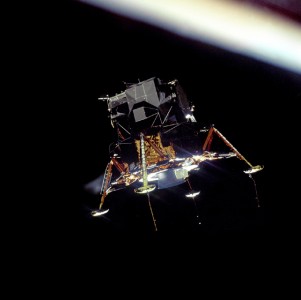 Photos, audio and video are used in accordance with NASA guidelines, “NASA generally has no objections to the reproduction and use of NASA material” and “You may use NASA imagery, video and audio material if it is for educational or informational purposes, including photo collections, textbooks, public exhibits and Internet Web pages.“

Tomorrow at Staples Center in Los Angeles, a Memorial Service for Michael Jackson will be held. Only 17.500 tickets was made available to the public, but they do expect over 700.000 poeple to attend. I’ve seen that some of the tickets are available on eBay.com

The service will be broadcasted Worldwide, and I guess it will be seen by a lot of people around the Globe.

In the memorial show “Inside Neverland” here the other day with Larry King, they filmed inside Neverland. And in the background you can see a shadow of something. A lot of fans do belive that it is the ghost of Micheal Jackson. I don’t think so, but I do see something.

News of the World have released a previously unseen videoclip with Michael Jackson when he was interviewed about the accusations against him in the mid 90’s. You can see the clip bellow.

Michael Jackson – The King of Pop – is dead at 50. He died from cardiac arrest on June 25, 2009. He started his professional career with The Jackson 5 in 1969 when he was 11. He released several studio album and Thriller in 1982 which is the most selling album of all time. He won eight Grammy awards in 1984 whith that album, including three different genres – pop, R&B and rock.

His music videos like Beat It, Billie Jean and Thriller will be remembered. So will his famous Moonwalk. From the early 90s his career started to fall with concerns of his health, marriedges, reports of financial problems and accusation of sexual child abuse. All this harmed his public image.

But even if he had a lot of problems the last 15 years or so, you can’t deny that he was one of the mest musicians ever. His 13 number one singles on the Billboard Hot 100, nearly 65 million Thriller ablum sold and a total of aroun 750 million album. And not to say that he made an impact in the pop-culture in the 80s.

Michael Jackson was and for ever will be The King of Pop.

Check Wikipedia for a deeper history of Michael Jackson.

—
Video from NBC with a recap of Michael Jackson life.

Digital Terrestrial Television (DTT) was launched in some parts of Norway in September 2007 and the whole country was covered in November 2008. Unlike US which killed the analogue switch in the whole country on June 12, Norway have taken an other approach. Norway have been devited in regions. Each region have had simulcast for 6 -12 months before the shutdown of the analogue signals which took place in the first part of Norway in March last year. On December 1st, 2009, there will be no more analogue signals.

In opposite to many other countries who started their DTT with MPEG-2, Norway chose MPEG-4 from the start, which is a much better compression technology. Norway, as rest of Europe, use the DVB-T standard. There are 25 TV channels available and 16 radio channels. Only the three TV channels from NRK (Norwegian Broadcasting Coopration) are free-to-air, unencrypted. The rest of the channels are available from the commercial pay-tv operator RikstTV.

It was said that because of the simulcast in the transition from analogue to digital, only three multiplexes would be available from the start, which wouldn’t give enough room for HD TV. In an ectually big surprise for me, TV2 (the biggest commersial broadcaster in Norway) announced that they will start to broadcast in HD from June 25, 2009 over the air. At first TV2 HD will only be available  on digital terrestrial television. But other providers like Get, ViaSat and Canal Digital will probably get a deal to broadcast TV2 HD through cable and satellite TV later this year.

TV2 HD will start to broadcast some shows in HD, and then expand on that. The first show is Allsang på grensen (best described as a sing-a-long-show) then Tour de France. They will broadcast movies on Friday and Saturday in HD, main match in Norwegian Soccer on Sundays, TV shows like Greys Anatomy/ Cleaners/ Scrubs/ Brothers & Sisters/ Criminal Minds / Life on Mars/ X-list, Nordic TV shows, Varg Veum (Norwegian crime show), Jakten på kjærligheten (love show), Da damene dro (When the Ladies left) and Skal vi danse (Shall We Dance).

I’m very excited over this and think I will be watching a lot more TV, just beacuse it’s in HD.

UPDATE: The first HD show have been aired on TV2 HD, I watched in and have written about it in a new blogpost.