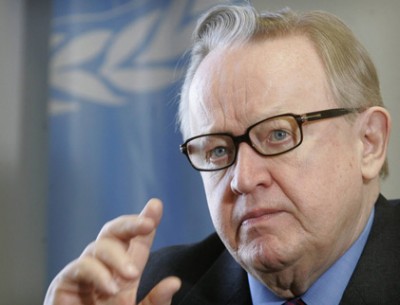 Martti Ahtisaari is the winner of this years Nobel Peace Prize.

Here is the full announcement from Norwegian Nobel Committee:

The Nobel Peace Prize for 2008

The Norwegian Nobel Committee has decided to award the Nobel Peace Prize for 2008 to Martti Ahtisaari for his important efforts, on several continents and over more than three decades, to resolve international conflicts. These efforts have contributed to a more peaceful world and to “fraternity between nations” in Alfred Nobel’s spirit.

Throughout all his adult life, whether as a senior Finnish public servant and President or in an international capacity, often connected to the United Nations, Ahtisaari has worked for peace and reconciliation. For the past twenty years, he has figured prominently in endeavours to resolve several serious and long-lasting conflicts. In 1989-90 he played a significant part in the establishment of Namibia’s independence; in 2005 he and his organization Crisis Management Initiative (CMI) were central to the solution of the complicated Aceh question in Indonesia. In 1999 and again in 2005-07, he sought under especially difficult circumstances to find a solution to the conflict in Kosovo. In 2008, through the CMI and in cooperation with other institutions, Ahtisaari has tried to help find a peaceful conclusion to the problems in Iraq. He has also made constructive contributions to the resolution of conflicts in Northern Ireland, in Central Asia, and on the Horn of Africa.

Although the parties themselves have the main responsibility for avoiding war and conflict, the Norwegian Nobel Committee has on several occasions awarded the Nobel Peace Prize to mediators in international politics. Today Ahtisaari is an outstanding international mediator. Through his untiring efforts and good results, he has shown what role mediation of various kinds can play in the resolution of international conflicts. The Norwegian Nobel Committee wishes to express the hope that others may be inspired by his efforts and his achievements.