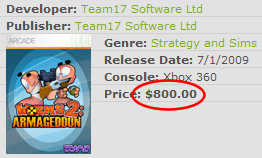 This week – Wednesday July 1st –  on Xbox Live Arcade, you can download Worms 2: Armageddon on Xbox 360. The game is 800 points, I guess. But on the Xbox webpage it’s listed as $800. That should be a big mistprint as you can se in the picture on the right.

Here is the discription of the game, taken from Xbox.com:

Ten years on from Worms™ Armageddon and the turn-based mayhem and destruction continues! Worms™ 2: Armageddon is the most fully-featured digital version of the game ever. With four player online and offline multiplayer, voice support, a raft of new weapons (including the return of some iconic weapons from the past), all-new high-definition landscape themes, new play modes, hats, skins, speech-banks, loads of other customization and to top it all off, a highly-involving single player experience with tutorials, deathmatches, races, fort games, and puzzles. It’s a package as high on fun as it is destruction! 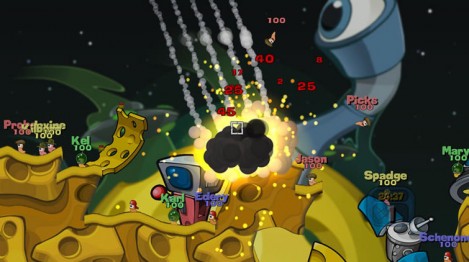